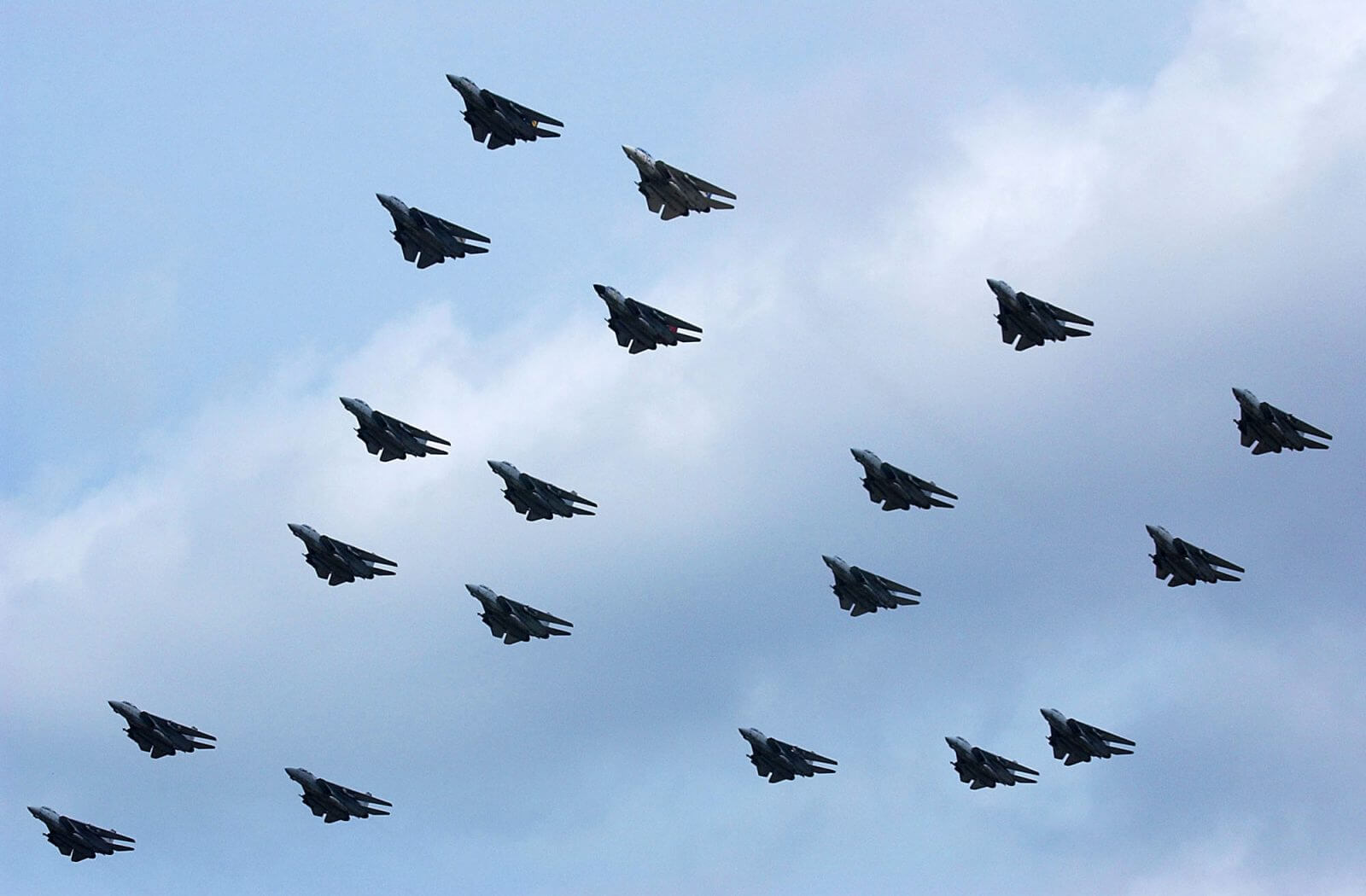 After the usual hype, anticipation and  trepidation, the F-14 Tomcat has made it’s debut to the skies of War Thunder’s Top Tier battles. In the previous article (the link to which I will leave at the bottom) I discussed the theorised performance of the Tomcat against the Phantoms, MiG-23MLDs and MiG-21bis fighters that we're pretty much used to seeing up there. But is it as overpowered and cool as we thought it would be? The answer is ‘uhm kind of' to the first question and a resounding “HELL YEAH!” to the second!

One of the Tomcat’s most notable features is it’s engines that in true American fashion come as twins, though they are (unlike most twin-engine jet fighters of Top Tier) spaced further apart to accommodate the airbrake. These engines can best be described as two roaring metal tubes that will move your machine past Mach on the deck with ease whilst chugging fuel at an alarming rate. The trade-off with the thirst of these engines is the ability play it like an F-104 Starfighter (oh the memories) especially with it’s wings swept in and ¾ of the enemy team are in premium American aircraft. You may now torture up-tiered F-5C players to your heart’s content!

However, it’s not all that uncommon to see Tomcats find themselves in situations where they are slow enough to the point of which they can be easily out-turned by F-5s, let alone MiG-21s. The F-14s manoeuvrability seems to have been overhyped, in that it still has to go toe-to-toe with the aforementioned aircraft, and against them it stands little chance without back-up.

•KEEP YOUR SPEED UP

Follow these simple principles and you will definitely make the most out of your machine.

Another topic I covered in the previous article was the Tomcat’s ability to track up to six targets at any given time with it’s Track-While-Scan mode and that this would allow one to fire missiles at different targets. This does in fact work in-game and it is not impossible to get (at the very least) one kill out of your Phoenix missiles. Personally, I would say they are absolutely nuts as it’s possible to launch multiple of them at a single target all whilst they still suspect nothing thanks to the Active Radar on the missile.

As a result of this, the smoke trails of Phoenixes being launched in opposite directions across the sky can be easily observed. This does make for some pretty imagery but one should NEVER forget the possibility that one of them may be coming for you Phoenixes are very long-range missiles, and they can easily hit even low-altitude supersonic targets even once out of fuel. In fact, it’s the lack of that RWR warning coupled with the lack of that distinct smoke trail at long ranges that makes the Phoenixes especially dangerous.

Of course, as the Phoenix was intended for long-range, BVR distances, it does not perform as amazingly (or at all) at the closer ranges of 5-10km. This job is better left to the Tomcat’s AIM-7F Semi Active Radar Homing missiles that can pull manoeuvres up to 25Gs at all aspects, with the cost of your target getting ample warning that you are sending what is essentially a radar-guided, beefed-up AIM-9 towards him.

Alternatively, you could use the AIM-9G. A sidewinder with a massive uncaged seeker that can lock onto and be fired from crazy angles with reported excellent flare resistance. Combined with the ACM mode on the F-14's radar, you can easily fire this missile at what will feel like 70° angles from your nose. Basically, you have the following options when engaging any individual target:

And then there’s the M61 Vulcan Cannon. If you’ve worn headphones whilst getting the Vulcan shot at you since this new update then you’ll know what it’s like to have what is essentially a flying madman come after you with a chainsaw. You could call it the GAU-8's little sister in terms of sound, even.

Like many other aircraft, the F-14 cannot deal with it’s adversaries in any single, guaranteed-to work-all-the-time method. Every aircraft in War Thunder has its individual strengths and weaknesses which encourage or discourage certain offensive or defensive options. In this section, I will go over the capabilities of aircraft you will more likely than not encounter and suitable actions to increase your chances of victory.

The MiG-21 series - A popular aircraft known for it’s manoeuvrability and powerful single engine (a trait seen in most 4th Generation Soviet Fighters). The MiG-21’s manoeuvrability is largely in part a product of it’s wing design, essentially a delta wing with elevators. As a result of this particular design choice, the MiG-21 and all of it’s predecessors share the same advantage and disadvantage in dogfights; a formidable turn rate that becomes increasingly poor the longer the turn is sustained. For this reason, it is best to approach MiG-21s with your missiles and/or cannon (it’s really up to you) when they can be spotted ‘dragging' through the air as it is a tell-tale indicator that they lack the manoeuvrability and speed to take evasive action. When engaging MiG-21s at speed, it is wise to ensure that they do not come closer than 2km as the R-60 missiles they carry can pull a max of 30Gs in turning. The threat of an R-60 can be VERY easily dismissed with the use of flares, however, with sometimes even a single press of your ‘Fire Countermeasures' key being enough to distract the missile. Still, be warned: the R-13 missiles are much more resistant to countermeasures. As for the threat of being shot by it’s cannons, you may rest easy in that the MiG-21's 23mm GSh-23L cannon requires some serious leading even at close distances to the point that it’s been described by some as a ‘water gun’.

The MiG-23M/MLD – Russia’s current meta aircraft characterized by it’s variable-sweep wings and chaff/countermeasures that fire upwards from the empennage. The MLD variant is among the faster fighters in terms of top speed at it’s tier with impressive manoeuvrability that allows it to go toe-to-toe against it’s adversaries. Whilst both the MiG-23M and the MLD do share the same design in terms of airframe, the difference in their offensive capabilities is night and day. Though they share the same cannon, the MiG-23M has access to SIX R-60M missiles. These are, to put it simply, all-aspect R-60s. Very dangerous in head-on situations. Additionally, it gets access to the R-23R/T missiles that are radar-guided and heat seeking respectively though they aren’t as good as the R-24R/T missiles that the MLD can carry. The R-23s and R-24s can both be easily thrown off with basic evasive manoeuvres and countermeasures but can just as easily sneak up on you. For this reason, I suggest staying in close combat with the MiG-23s as the MLD does not have access to R-60Ms and the M is not as manoeuvrable. Additionally, both aircraft are easy to, well, not get gunned down by thanks to the Soviet Union’s brilliant decision to leave the ‘water gun' on these aircraft. Keep your eye on your surroundings as both the R-23T and R-24T can be locked onto you with the use of the MiG-23's IRST that acts as a sort of ‘stealth’ radar, except it only tells the enemy your presence and not your distance, relative speed or direction. Having played both variants for some time I can confidently say that this is the closest thing a Soviet aircraft gets to the F-14 in terms of Long-Range capabilities. Countermeasures will easily throw an R-23/24T off thanks to this, with manoeuvring being a lesser concern.

The F-5C/E - A VERY lightweight American fighter recognizable for it’s small size, annoying tendency to survive missile strikes and wing design reminiscent of the F-18. The premium C variant has proven more popular than the E variant thanks to a recent half-price sale coupled with the hype of the F-14 and it’s debut. Whilst both variants are extremely nimble to the point that they can face off MiG-21s with little effort, their difference lies in offensive capability. The C variant gets access to AIM-9E AAMs that are widely considered obsolete as they are considered (and quite rightfully so) AIM-9Bs with an uncaged seeker. The E variant on the other hand gets the beloved AIM-9J missile, able to pull 20Gs with a rear-aspect lock range of 5.5km and a launch range of 18km. As such, when facing F-5Es you would do well to keep an eye on your six as 9Js are capable of surprising you, even if you think a simple turn roll at long range will throw it off. Additionally, the E gets access to a radar with ACM mode (two things the C doesn’t get) therefore allowing missiles to be fired from even a lag pursuit. What makes both of these deadly is their dogfighting capability and their 20mm M39 cannons that, whilst not sounding as meaty as the Vulcan, still back a hell of a punch. As a lover of the F-5E I will tell you now, there is no target more inconvenient that keeps his speed up and stays aware of missile threats on his six o'clock.

The F-14 Tomcat’s addition to Top Tier's current climate, with it’s current capabilities, puts it at the top of the food chain when it comes to battle. Of course, it’s not as severely overpowered as the Harrier GR.1s were (lest we forget those terrible days of the SRAAM Empire) but it does most certainly live to the hype. Still, it is likely that those fighting the F-14 will, as mentioned before and as seen with many other new ‘overpowered’ vehicles, will come up with new ways to counter its strengths.

And just to recap, here are some brief tips on dealing with the enemy aircraft I mentioned:

• MiG-21– Keep speed up, wait for opportune moment to strike

•MiG-23 – Engage at longer distances, use anything really

And as for you guys facing off against this formidable flying machine? Radar lock from a Phoenix and/or AIM-7? Notch, Chaff and Manoeuvre. Up close and personal? Try to slow him down and be an inconvenient target.

All these considered, the ‘tough but fair' vibe of the Tomcat comes in; it’s a challenge but it’s not a test of who can last the longest without quitting the game. Better or worse yet, depending on your take on it, this is only the Early variant of the F-14. Until next time however:

See you up there, Aviators.

The Link to the Previous Article: https://www.everythingwarthunder.com/devblog-talk/f-14-tomcat-will-the-skies-become-a-danger-zone/

Got any questions? You can always ask them to one of our contributors by joining the Everything War Thunder Discord server! https://discord.gg/bWYVcJHuXB