How to destroy the B1 Bis in WT and Get Kills with it. 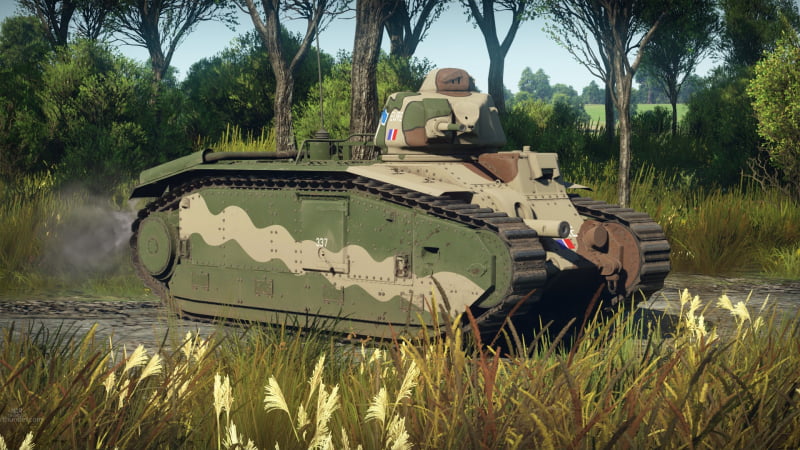 Before we begin the analysis, let's paint the picture.  You boot up War Thunder and queue up for a game of Arcade/ Realistic Battles and begin your assault on the map Poland.  Things are going smoothly in your shiny new m3a1 Stuart...  The gun is decent to punch through the enemy panzers, bt7s, and other light tanks..

You even swore you killed a panzer 4 from the front.  You go around the corner and spot a new hulking beast.  French players in the wild are rare to see, so the sight of this monstrosity sends a chill to your spine..

You let loose a hot round against it's front armor, and you get the dreadful words ”target undamaged”.  Without the main gun even looking at you, it lets loose it's hull-mounted 75mm and you are ground to dust.

The tank you just encountered was the b1 bis, a heavy, versatile tank developed in 1921, used in the battle of France.  Its large structure makes it nearly impossible to destroy with 1 hit and it's armor is so strong, that a 37mm round from the back even has difficulty disabling it at times. The 2 guns, can suppress the enemy in 2 directions, meaning you have to rely on your teammate and his SPG to take out enemies.  The vehicle sounds insane on paper: high penetration armor, insane firepower, decent speed, and high survivability at the battle rating it sits in, how can this thing be stopped?

Good news! It's entirely possible! Despite the fact that looking at the char B1 bis is a terrifying sight alone, just remember that nearly all tanks (apart from for early Russian SPGs, because these are awfully slow) will have the ability to outmaneuver it.  Take our Stuart pal for example…

The left side of the tank is the Achilles heel, and i don't mean the British tank.  Looking at the left side, there is an interesting design choice the french made.  A very convenient radiator vent that just so happens to lead to the engine compartment.  It baffles me to this day that the french did it, maybe to help balance war thunder for gaijin(how considerate), but you can press this advantage.  1 shot in there will lead to the engine breaking down, starting a fire, and leaving it with a 40-second repair.  The job isn't over yet though, because you should assume it has fire protection equipment onboard.  The next goal is to bust its tracks.  As much as I hate it, the best option is to take the tracks out, due to its incredibly high armor.  The tracks are armored, so you'll need something more than a .50 cal(12.7mm).  Upon destruction, you have left the b1 immovable, this lets you target the final weakness with as much free time as you want, the turret ring.  The turret ring is a good spot to shoot on any tank, due to them normally being relatively hard to armor.  The b1 bis is no exception.  Firing at it will take out their 1 gunner.  This will leave the tank inoperable for a good amount of time, allowing you to target other weak points you “happen” to stumble upon.  Perhaps the flat slab of iron on the left side of the drivers port? Even a 20mm can pen that.  Just know that the b1 bis has a 4 man crew meaning that it will take a long time to defeat it.  The best bet is to find a way to catch it off guard or to coordinate an attack with your squad.

medium / well-armored tanks have a much easier time with the b1.  The target is the same, but the b1’s main gun is not that powerful.  Standard angling techniques will allow you to prevail here.  The main issue you'll face is the hull-mounted 75mm, which packs more than a punch.  Luckily, it has no horizontal rotation at all, meaning if you get around the vehicle, you won't have any issues with it any longer.

Spg units will have a blast fighting these.  All you have to do is not get into a head-on with it, and you'll win every time.  The b1 has 2 guns to make up for the fact that both aren't that powerful.  Use this to your advantage by attempting to snipe or catch it on a corner.

While the b1 is a great tank, and scary in general, it can be beaten. So long as you don't take it 1-on-1, you should win. To simply put it the B1 mindset is a dangerous one, since they are heavy, they have to be in front of the battle line.

The B1 player tends to act alone, wanting to bounce shells all day.  When the B1 tries to charge in and take on a tank, use that situation to swarm him with teammates if available, as the B1 can get overpowered easily and eventually the monster will be felled.

To the B1 users

The b1 bis is my favorite tank of all time.  It's such an odd tank to look at and it performs wonderfully on the front.  The way to play it reflects upon its uniqueness as well.

The first thing is to make sure you are never alone and this is because whilst driving the B1, you are the designated sponge for your team.. You soak up the damage and then dish it back with equal force. The real issue begins with when you're soaking shots, make sure your squad is charging the enemy team whilst they're focused on you.

Using both guns, as well as your machine gun can aid you with taking on the flak.  When attracting fire, you are now in your prime habitat and as the enemy starts firing at you, angle your tank to the left by about 30 degrees so that you can cover up the radiator vent, allowing you to get over 100mm armor on all sides of defense.  This renders all but the most powerful guns to get through you.  If an enemy tries to flank you while engaging an enemy, try to angle yourself to where you have some angle on them but show a flat front to the original enemy.  This doesn't guarantee a shell bounce, but it keeps the chances pretty high. Using this tactic will keep you alive for a long enough time to take care of any issues you may have.  Whatever you do, do not reveal the vent, or you guarantee your death in the Char B1 Tank...

When looking at your offensive armament, it's recommend to use 20-25 shells for the 47mm and 12-15 for the 75mm.  Remember that the 75mm does not rearm on points, so use the gun sparingly.  The main gun has enough punch to beat lights and some mediums from the front, but will encounter difficulty with heavier armor.  In this instance, you have 2 options at hand, use the 75mm shell, or engage in a slugfest (A slugfest is a phenomenon in which both tanks can't kill each other, but proceed to waste ammo until 1 falls).

The slugfest is actually not a bad decision, considering that the B1 tank will most likely survive in most situations however, a teammate will be needed to finish them off much quicker.

All in all, the high armor advantage and twin guns make the tank a force to be reckoned with, so long as you don't get too cocky and play with your food, you'll be a valuable asset and most likely aid your team to victory.