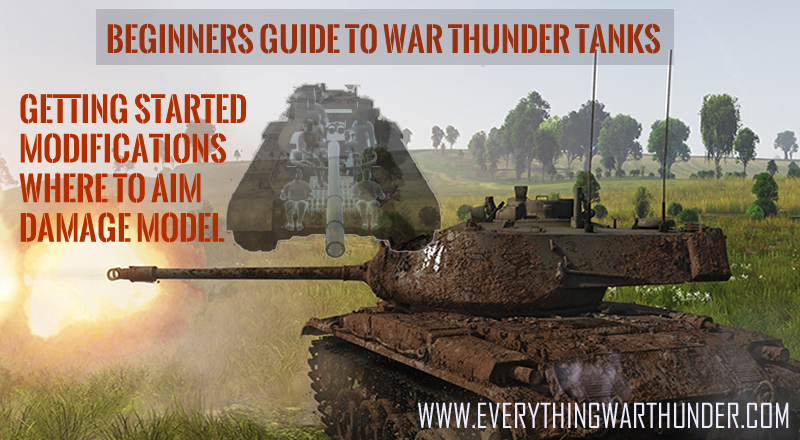 In this complete beginners guide to war thunder tanks we'll be covering some of the main aspects of ground forces from how to play Tanks to understanding critical hits and ammunition types. this is what's covered:

Firstly, how to get started on War Thunder Tanks!

When on the main screen of War Thunder press the Research Button on your selected country then the ARMY button to bring up your tree of tanks, you can then choose a crew to put the tank on, however later on when purchasing new tanks you'll be required to train your crew which costs lions.

It's always best to familiarise yourself with every tank you take to battle, as seen in the picture below war thunder gives detailed specs of each tank such as; gun types, speed, weight, ammo, armour and crew as well as any other useful information.

Once you've selected the tanks for battle then click the 'To Battle' Button and select one of the battle options (Tank Arcade Battles, Tank Realistic Battles, Tank Simulator Battles).TIP - Use Test Drive before entering a battle!

I highly recommend that you use Test Drive on any of the tanks you're about to use in battle, this is just so you can get a feel for the game as well as practising your controls and aiming.. It's best to use the target tanks to understand the game
physics such as the velocity / bullet drop and tank responsiveness.

In war thunder you can select to play different tanks from anti-air such as SPAAs to heavy and
Tank modifications help your tank improve in significant ways thus increasing the chance of survival, to unlock the mods you can select to research each of the tanks in the tree line, most of the time using the previous vehicle to research the next gives you the best Bonus research points.

These are the most common used ammunition types in war thunder with each to their own advantage, allowing you to effectively damage your opponent based on what you're attacking, they come in different sizes ranging from 7,62 to 152mm rounds.

Where to aim (Critical Hits)

Some of the best critical spots to go for on tanks are all over the tank depending on where you're firing from, for example when you view the front of the tank you can see crew members in their positions which have hatches as the viewpoint. It's good to fire a few shots around these viewpoints to try and take out different crew members such as the driver hatch which is either left or right side of the upper front of the tank.. one side will have the turret crew of two which is usually the left side meaning that once you've manage to knockout/kill a crew member they'll try to replace that member whilst being hit around other hatches, at this point they're mobilised to perform different actions such as fire, reload or move.

Another good angle of attack would be to approach from either side of the tank allowing you to damage various sections such as the engine, tracks, fuel tanks, transmission and ammo racks but it's best to note that most tanks tend to have very strong upper plating either sides so going for the lower plate is a better idea. Using different ammo types such as HE / HEAT and APCBC  give good penetration and damage effect.

The war thunder damage mechanics means that due to the in-game weapon parameters your hit will be very accurate and effective based upon different variables, they have incorporated real life documentation from field tests including aiming charts and technical data revolving damage and other variables such as armoury & materials... this also goes for ammunition types as they include different penetration characteristics & explosive properties meaning your damage will vary upon a lot of elements, this is why it's important to research the types of tanks you could be up against in battle. To find out more it's best to check out war thunder's damage mechanics.

I hope this post on the basics to war thunder tanks helps you in battle and what to look for when researching about tanks! Please feel free to leave a comment if you have anything to add or say. We'll be adding more guides soon.