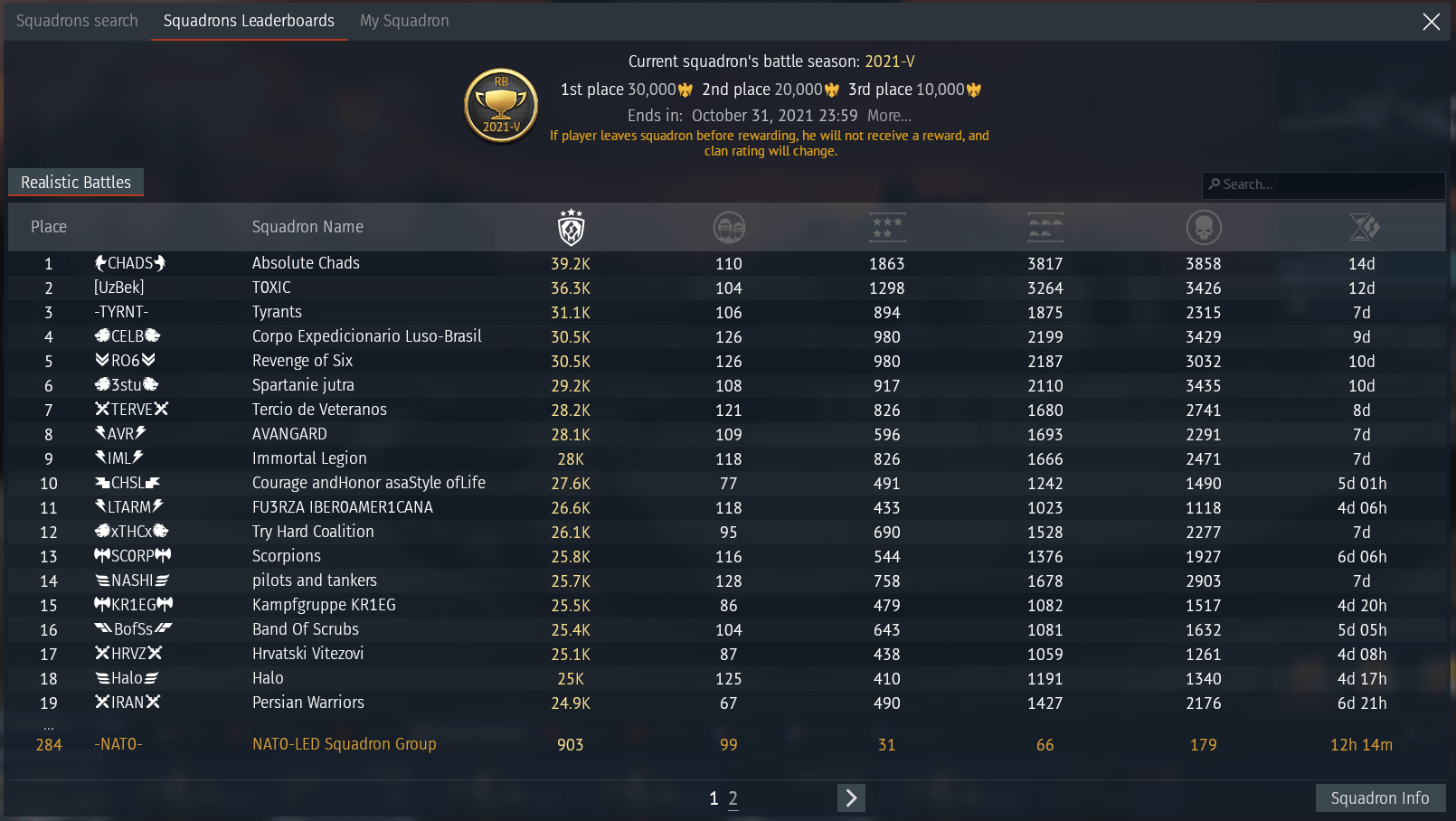 So, you want a join a War Thunder squadron? This quick guide will explain everything you need to know about squadrons in order to get started.

Squadrons are groups of players united under one tag that displays next to their name. Squadrons are great because they are a way for communities to come together in-game and play together in custom game modes like Squadron Battles or World War Mode. They build communities both in and outside of the game and through them you can even earn custom vehicles!

Creating a Squadron in War Thunder

When creating a squadron, you get to choose your custom name, in-game tag and the character borders that surround it (=SQUADRON=), region, squadron description and an announcement that will display on the list of squadrons.

Rank Structure of a Squadron

A squadron's rank structure is very straightforward and allows ranked members of your squadron to perform actions around the squadron based on their rank.

Within the squadron, you'll be able to see some general statistics which will help you understand how the squadron is going such as; squadron activity, points

You'll also be able to see the total number of air & ground vehicles destroyed, deaths and time spent in-game - these metrics will be displayed on the war thunder squadron leaderboard from the past 2 weeks of statistics.

On the squadron information page, navigate towards the bottom and look for 'Activity', when you click this a window will appear with the statistics for the last period, so you can better understand how your contributions and the squadron's activity affect your Activity Reward.

When joining any squadron you have the ability to research squadron vehicles that are only available to squadron members and can also be researched at the same time as other vehicles. Think of them as premium vehicles for the squadron but you would only obtain them through actively playing the game whilst in a squadron.

Points are calculated every 3 days.

How are the squadron research points calculated?

For every 200 RP won in-game the player will earn one activity point, the activity of each individual player is then totalled to get the squadron activity. The value is capped at 360 points during the 3 days period for each player.

What's the maximum amount of activity points I can gain?

The activity points are capped at 360 points every three days.

How long does it take to unlock a squadron vehicle?

This answer will depend upon the number of members within your squadron and how active each member is.

If you've always wondered how quick can you research a squadron vehicle in war thunder then this may hold the answers for you, provided by 'Alien109' in the war thunder forums which will provide you with the specific formula to calculate the average squadron activity points you can gain.

If your War Thunder Squadron has 128 members.

How to receive the maximum reward?

Each squadron player will need to get their personal activity equal or greater than the squadron activity.

Let's say you have 43% or more activity within the squadron, you'll receive 20,000 points for the vehicle research (in a 128 members squadron with 43% activity).

This is the same amount however, the equation changes when activity is less than the first example, looking at 2 terms of the division which are equal, so they actually cancel each other out.

Points to take away from this calculation

The most efficient way to research squadron vehicles

If your War Thunder Squadron has 100 members.

Advertising a squadron, where?

Opening a squadron is easy, obtaining members is the next challenge, so let's talk about advertising your squadron to find new members, where can you do it to find the members that will actually stick around?

I've been helping to advertise/recruit for my squadron for over 7 years and have always found the best place to start is the war thunder squadron forums, which will allow you to create a topic and give some information about your squadron.

There's also another category under squadrons called 'looking for a squadron' whereas players look to find actively recruiting squadrons, replying to these topics will certainly help you gain some more members.

You can also recruit whenever you're in the game via the chat feature. Click on Chats -> Create Chat and on that window, you can select 'Squadron Recruitment' from the category dropdown.

Pro Tip: Write your recruitment ad within discord or a word application and copy & paste it into the box, this way you can keep a copy and also style it by adding spaces, links, bold etc

Discords and other places

Alternatively, if you Partner with EWT we can provide you with an account to post a recruitment ad on our website which gets submitted to a channel directly in our community discord, it all helps with extra exposure and plus you get a cool page to display your squadron.

Squadron battles are formed of 8 members per side (A Platoon) which will take part in realistic battles against other squadrons, they compete in a tournament for silver lions and golden eagles, all of those squadrons that get into the top 20 will receive rewards.

For each battle won the winning squadron will get a maximum of 32 points and -1 for each loss, these then contribute towards a worldwide ranking (squadron rating).

Squadrons who get within the Top 100 squadrons on the leaderboard will also obtain squadron borders that sit around your squadron tag i.e. NAT0 tag will display as =NAT0= -NAT0- [NAT0] or any other tags obtained.

The squadron battle schedule/times are always listed on the war thunder forums found here. (make sure to go to the last page)

Being a part of a war thunder squadron brings a whole new level to the game, with some amazing squadrons out there which are happy to help newer players grind vehicles, tasks or just to have a laugh and win matches.. there's no reason to why you shouldn't join one. It's the only way you can really experience some great gameplay with other members who have passion for the game just as much as you do.

For those of you looking to command your own squadron for anything more than 'fun' with a few mates, It will be a new experience for you to keep everything together.. even when things start to pick up and you have members online going to SQBs, there's always a chance one or two hiccups could cost you your members. You are put up against challenges every day from recruitment, member management and SQBs which are a repeat headache for many squadron commanders.

I hope this article on war thunder squadrons has helped you out, if there's anything you'd like covered please drop a comment below.