How to Use Air-to-Air Missiles 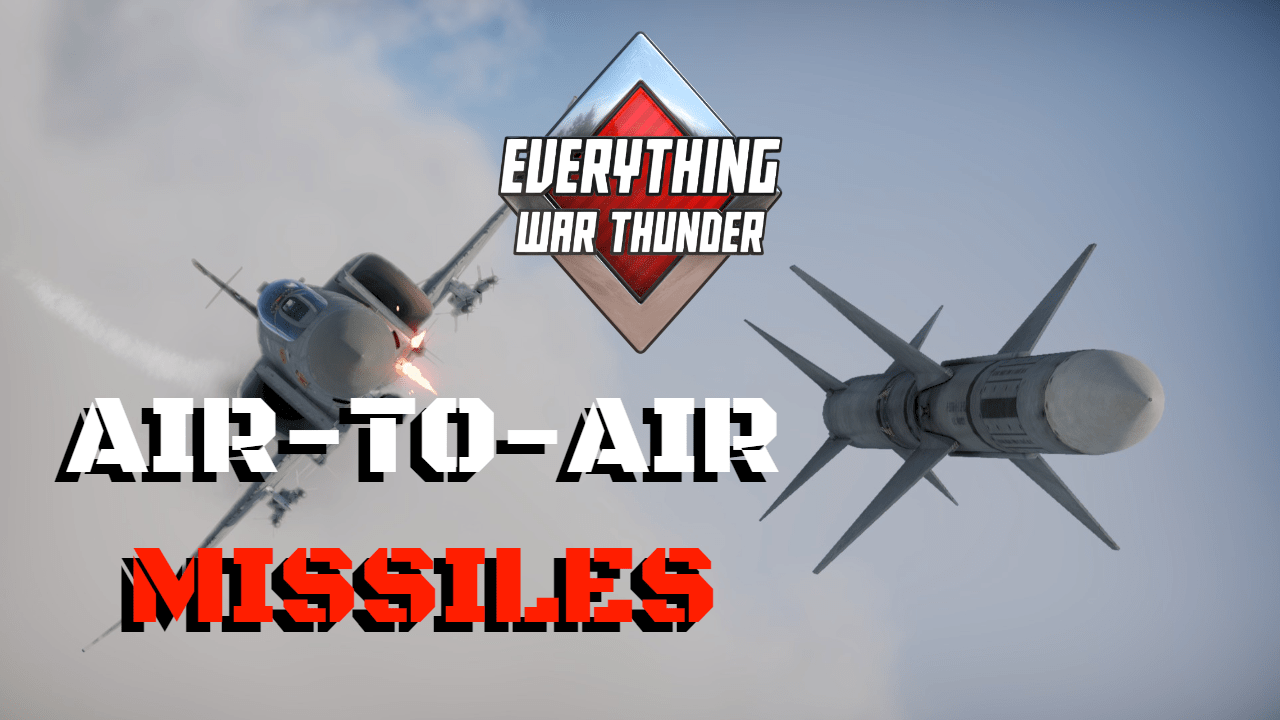 In this guide, you'll find everything you need to know about air-to-air missiles in War Thunder. We'll learn what missile statistics mean, all the missile types in the game, how they interact with your radar and how they are used in this conclusive guide to help you dominate the skies of high tier jet gameplay.

What is an air-to-air missile (AAM)?

Air-to-air missiles or AAMs for short are missiles fired from aircraft for the purpose of destroying another aircraft. Broadly speaking, there are two kinds of AAM:

Missiles emerged shortly after WWII as the new form of air weaponry. First-generation jets such as the F-86 Sabre and MiG-17 were soon equipped with very primitive missiles, though development quickly advanced into this new niche of air combat and missiles diversified into many distinct types during the Cold War as the aircraft alongside them advanced, such as the F-4 Phantom II or MiG-23.

It was believed during the Cold War that the days of dogfighting with guns were over, and so missiles soon became the dominant weapon type. However, it was soon learnt after experience gained in the Vietnam War that guns were still a useful asset to an aircraft's weapon suite, and so many modern fighters today still carry guns in some capacity, though it is true to say the art of modern air combat is defeating the opponent using your radar and AAMs.

To first understand how AAMs really work in War Thunder, let's take a look at their stat cards in-game. They tell you the following:

Guidance: How the missile tracks its target

Aspect: What direction it can track a target from

Lock range: Maximum range that the missile can lock on from.

Launch range: Maximum range that the missile can travel before self-detonation. Not the max range in practice - just the full distance it can travel.

Maximum speed: Top speed of the missile during flight

Maximum overload during launch: Maximum Gs the aircraft can pull while the missile can still fire. Any Gs over this and the missile will simply not fire.

To fire an AAM, you first need to spool up the motor in the missile so it can begin acquiring a target. Press this control once to spool it up. Once you have a lock, press this again and the missile will fire.

MCLOS missiles require additional controls since they are player-guided. After using the above control to fire the missile (MCLOS & SACLOS missiles don't spool up), guide it in with the following. I recommend you mess around with the controls to make it easier to control them:

Some of the earliest AAMs post-WWII used to require manual aiming from the pilot to guide the missile into the target. While hard to use and often unrewarding, these missiles can be really useful in dogfights where the enemy doesn't expect it or in head-ons where all the missiles at the BR ranges these missiles are used are rear-aspect - killing someone with a missile in a head-on often takes people by surprise, and they can be quite fun - I just can't recommend them to beginner pilots as they are not easy to use.

IR missiles are the main WVRAAM used since the onset of missile technology in the early 1950s. IR missiles work by a seeker's head in the missile nose detecting IR radiation emitting from an aircraft, which it then locks onto and fires. There are 2 main types of IR missiles:

Earlier missiles often had a "caged seeker" - where the IR-detecting electronics are mounted directly forwards and have a fixed cone of detection. In War Thunder, this is represented by a single grey circle, showing the missile's detection cone. A target must be in this circle to get a lock.

Later missiles have an "uncaged seeker" - where the IR-detecting electronics are mounted on a gimbal that can pivot and rotate, so the missile can detect and track targets that aren't necessarily directly in front of it, which helps to get an initial lock, allows your aircraft to "lead" ahead of the shot, and helps maintain a lock against a moving aircraft. In the game this is represented by two grey circles - the inner being the seeker's head, and the outer being the limit of its gimbal.

IR missiles are great for short-range knife fights where you're manoeuvring to get in shot of the enemy. It's important to remember their shortcomings though - they're pretty useless above 5km, and even later missiles can still be easily dodged with careful flaring and evading. I recommend you only fire when your target is slow, travelling fairly straight, not turning as hard as it can (though if it's doing this vertically it will bleed energy and that's a great time to fire) and when your seeker isn't on the edges of its gimbal track, as it will easily lose guidance while you're still finding a lock.

SARH missiles were first introduced in the 1960s and were the next leap in air combat, establishing BVR (beyond visual range) engagements as the future and BVRAAMs as the main weapon. These missiles were eventually largely phased out in favour of ARH or active radar homing missiles, which are still widely used today along with all-aspect IR missiles. ARH missiles aren't yet represented in-game as of December 2021, but we will most definitely see them at some point in the near future.

SARH missiles work by your aircraft locking onto the target with its own radar. The seeker's head detects the emitted radar waves bouncing off the target and follows the detection to track the target. You must first get a radar lock to fire SARH missiles, and you need to maintain that radar lock for the entire duration of the missile's flight, or else it will lose track and be wasted. Essentially, you are "guiding the missile in" by showing it the target locked on radar.

SARH missiles are great for long-distance engagements of an enemy well out of the range of their more agile dogfight missiles, where depending on your piloting skill and aircraft performance, maybe an area you want to avoid. While they generally have lower maximum overload than IR missiles, SARH missiles are not to be underestimated as you often don't see them coming from 10-30km+. You generally want to use these at long range, but some advanced SARH missiles like the Skyflash or AIM-7F are great in dogfights too!

After pressing "Fire air-to-air missile", 1-3 circles will display on your screen. At first, it's spooling up in the "PWR" (powering) mode and the smaller circle will blink slowly. When the missile is ready and looking for a target in the "ACQ" (acquisition) mode, the circle will blink faster and sound a tone. When you have a lock in the "TRACK" mode, the circle/s will turn red and sound a sharper tone - you are then ready to press "Fire air-to-air missile" again and fire.

IR missiles only have 1 circle if they have a caged seeker, and 2 if they do not. However, SARH missiles have 3, with a slightly larger circle surrounding the seeker's head. It moves clockwise around the circle, and it shows the strength of the radar waves reflecting off the target - the more complete the circle, the stronger the signal.

Most aircraft able to carry SARH missiles can carry IR missiles too, so press "Switch between primary weapons" to toggle between your heatseekers and radar guides.

So we've gone over what an air-to-air missile actually is, how they work in-game. We've learnt about the 4 different types - how they work, how to fire them, and how to best use each of them. Top tier air combat can be daunting and sometimes cruel, but it can also be really fun, using your superior knowledge of the battlefield and usage of your avionics and missiles to defeat opponents.