Getting Around: The Three American Developmental Heavies: T29; T30; T34 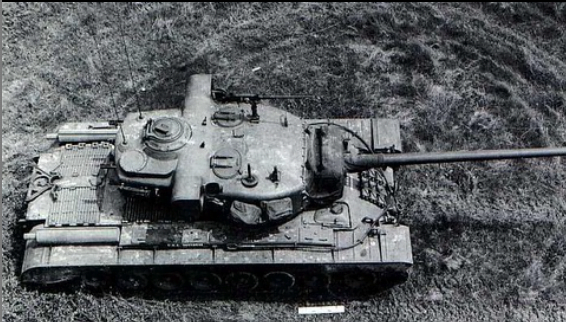 Are they the same tank? What are their differences? Why were there three?

These three American heavy tanks sometimes cause uncertainty regarding which is which. They are nigh identical to the untrained eye and thus insanely difficult to separate for most people. Therefore, here a somewhat short guide on or analysis of the three in order to more easily identify each one of the three. This will obviously also help with identifying these on the battlefields of War Thunder, allowing for a more easy choice of strategy against it.

As understood from these three pictures taken from War Thunder, each of the three heavy tanks fires its own round, sort of round, even, meaning that each of the three posses its own threat - one more scary than the other for certain tanks and less scary for other tanks. So separating these three from one another is crucial for survival - if not in a simulated real-life situation, at least in War Thunder. Each one of these rounds also possesses its own damage model and, aside from its normal damage-dealing capabilities, deals damage on its own with pressure damage mechanics; meaning they enjoy different shock wave efficiencies. More on the pressure damage mechanics and shock wave properties can be found in this article.

Now, instead of talking about how important it is to be able to separate them and identify correctly, let's move on to discussing how to actually separate the three. The easiest way of approaching this matter would be to look at the historical context of the T-series of heavy tanks.
Facing german heavy Tiger IIs in Europe, the American Army realized that their M26 Pershing, then, heavy tanks* were unable to hold their ground effectively. In March of 1944, to combat the big german cats, the Army began working on a new heavy tank concept. Among others, three heavy tank concepts would ultimately go down in the history books: T29, T30, and last but not least the T34.

Historical explanation - simple (everything you need to understand the difference)

The concept was started with the T29 Heavy Tank in March of 1944. This tank was armed with a powerful 105mm T5E1 or T5E2 gun. T29 was fitted with a retractable rangefinder protruding from both sides of the turret, resembling "ears".

A further development came from the T29 at the same time, and it was called the T30. The T30 was closely related to the T29 and was virtually identical. However it featured a 155mm T7 gun, a more powerful engine, as well as an additional loader to help handle and load the massive ammunition for the gun. There were only two T30 prototypes produced

Then from both of these came the T34. It came a bit later and was the last variation of the T29 tank. It also worked as a modernization of the T30 tank. T34 mounted a 120mm T53 gun derived from the M1 AA gun to further improve the concepts armor penetration capabilities. The difference was there was another 101mm of armor welded to the back of the turret to hold up the way longer and heavier barrel.

History - advanced (for the reader that would like a bit deeper understanding, can be skipped)

The concept started out with the T29 in March, 1944. It was based on the chassis of the M26 and was similar to the T32. This prototype was armed with a 105mm gun, the T5E1; two cal .50 MGs; and one cal .30 MG. Two pilots were built in 1945. Some variants of the T29 had a coincidence rangefinder protruding from either side of the turret, which resemble ears on the mid rear of the turret sides, the T29 above does not have such a rangefinder (the T29 in the featured intro-image demonstrates these. This T29 also lack the famous muzzle brake). In mid-1945, it was ultimately decided to order 1,152 T29 tanks, both for a swift end to the war in Europe as well as to be used in a possible invasion of Japan. Shortly after the end of World War II, though, only one T29 had been produced, and a second was half-complete. In August 1945, the order was cancelled altogether; the intention was to acquire ten T29s for post-war testing. This number was later reduced to eight in July 1947.

Out of the T29 prototype came the progressed T30. This prototype was armed with a 155mm gun. Besides the change in caliber and an added loader in the turret, the T30 was nigh identical to the T29; some sources say a different engine was added, some refute this. Nevertheless, it still looks the same.

Lastly, after the Army Ground Forces doubted that crewmen of the T30 could handle the sheer weight of the 95lb 155mm projectiles with a 40lb propellant casing and instead proposed a conversion of the successful 120mm antiaircraft gun to an antitank gun, the T34 was created. Pilot tanks of the T30 tank were taken and rearmed with this 120mm gun. An additional armor plate was also added at the back turret of the new T34 tank to balance up the added weight of the longer and heavier 120mm gun.

As the battle for Germany peaked in the spring of 1945, almost 1200 T29 and well over 500 T30 tanks were accepted into limited production. The collapse of Germany did not change anything in the production orders, and the T29 was slated for use in the invasion of Japan. However, Japan's surrender put and end to the production and further development of the heavy tanks. Lessons learned from these concepts were helpful in the development and production of the M103 Heavy Tank, which entered service in 1957.

Now, what is the difference?

The T29, the T30, and the T34 essentially portray further development stages of the T29 tank, which came first. The difference between the three is practically their armament. The explanation is actually very simple, the T29 has a 105mm gun, the T30 has a 155mm gun, and the T34 is equipped with a 120mm gun, as well as an additional armor plate at the turret back to counterweight its longer and heavier gun. Why was an entire long article needed to bring this small amount of information forward? Well, because why not? It is an interesting subject that needs explanation - the deeper the better.

The mere possession of this information is not enough to be able to separate the three from one another, right? So, how does one see which is which? The best tip is to look at the gun barrel, more precisely, the muzzle break. In-game, the 105mm gun of the T29 mounts the two-fuse muzzle break seen below; the T30 demonstrates its 155mm gun with the one-fuse muzzle brake seen above; while the T34 mounts the prolonged muzzle break, the one that sort of looks weird. Trying to see this difference in War Thunders games can be difficult, especially from range, and to be completely honest, standing right in front of the heavy tank makes it extremely difficult to identify it. As shown, knowing which of the three heavy tanks you are going up against is crucial. Engaging one of the three, without knowing if it is the T29, T30, or the T34, is not advised.

*On the 6th of May, 1946, new weight classifications for types of tanks were approved, reclassifying the M26 as a medium tank.