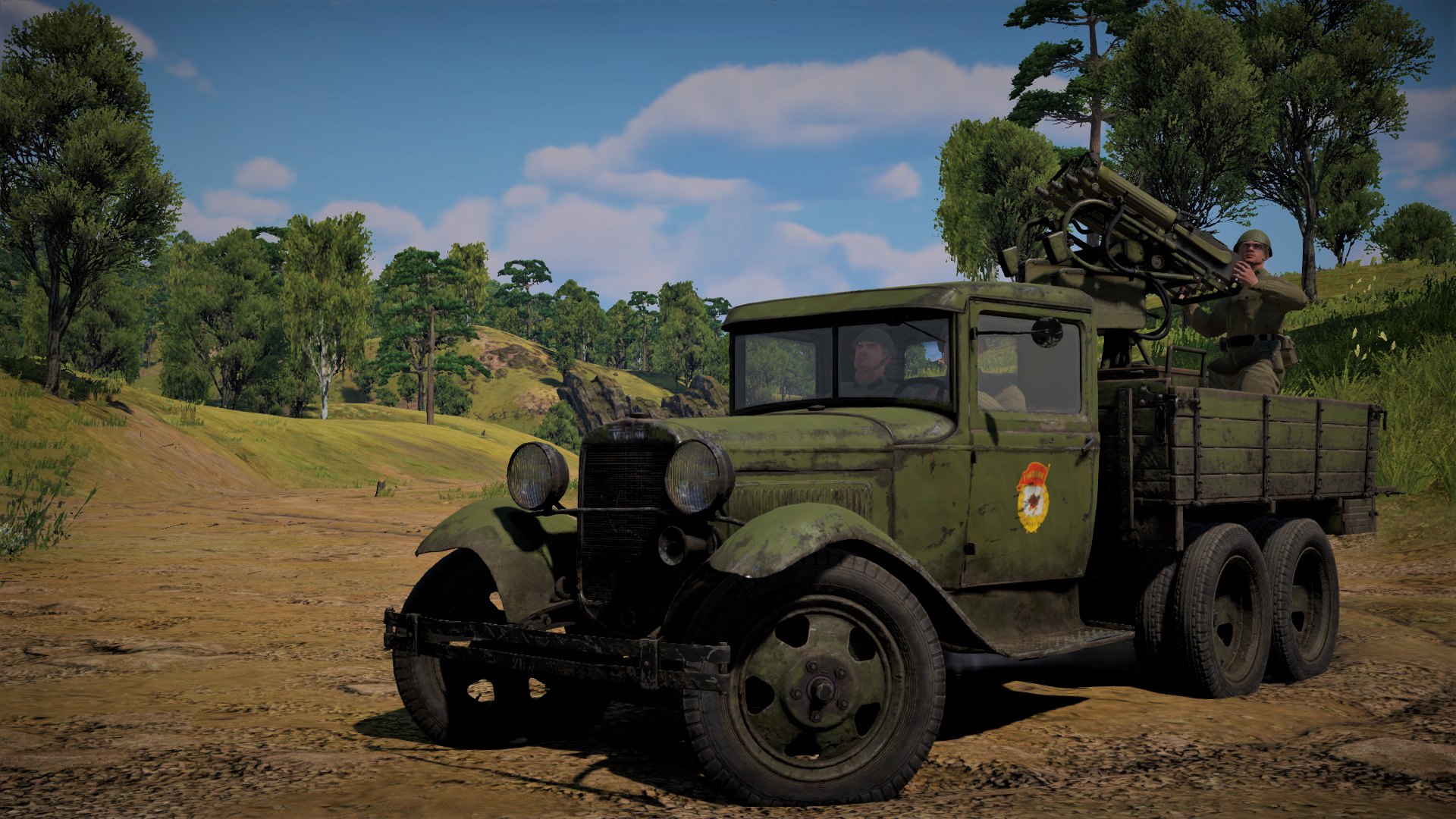 Welcome back. In my previous post, I have discussed the history of the GAZ-AA, GAZ-AAA and GAZ-MM. Today, I will be looking at various modifications of this vehicle available to players of War Thunder. Let’s begin!

Oh, yes. If you read my previous article, you know that this is the very first vehicle I have ever played in War Thunder. It has been pointed out to me that this could not have happened, because GAZ-AAA (4M) is not a reserve vehicle and needs to be researched, but it is certainly the first vehicle I remember playing.

Sitting at a battle rating of 1.0, players with this truck are likely to counter reserve vehicles driven by rookie players who are playing War Thunder for the first time, especially if you play arcade.

The vehicle is armed with four 7.62x54mm Maxim PM M1910 machineguns, installed side-by-side in a quad mount. While this might seem as useless for War Thunder, it can be pretty deadly. The four Maxim machineguns will shred any 1.0 aircraft to pieces.

At high battle ratings, GAZ-AAA (4M) can be used to target helicopters and, like aircraft at low BRs, shred them to pieces. This will make any helicopter pilot as salty as a packet of crisps and you are going to get a good laugh out of it.

However, there are limitations to the capabilities of the GAZ-AAA (4M). Players should absolutely positively not target tanks, as even the lightest armoured tanks, such as BT-5, will prove impenetrable to the GAZ-AAA (4M)’s machineguns, which have a maximum penetration of just 10mm. If you want to target ground vehicles, you can shoot at halftracks, other trucks such as the Japanese Type 94 or opened vehicles like the Ho-Ro, because the guns are just too weak for stronger targets. What’s more, the maximal elevation angle isn’t great and the guns cannot make a full 360 degree turn. Well, you cannot have everything in one vehicle, can you?

The GAZ-AAA (DShK) is a strange vehicle.

While the previous GAZ-AAA (4M) was a production version, GAZ-AAA (DShK) seems to be an improvised fighting vehicle. It is the same old GAZ-AAA truck, only this time it has a 12.7x108mm DShK heavy machinegun mounted on a tripod in the bed. Just like the previous GAZ, this one sits at 1.0 and has no armour whatsoever.

Be advised that this version is particularly prone to tipping over and therefore requires gentle handling of a professional driver.

Even though it is called an SPAA, the DShK version is much less useful than the GAZ-AAA (4M) in combating aircraft. The major drawback of the gun is its small magazine – just 50 rounds – which can be emptied in no-time and reloading takes a few seconds. On top of that, the machinegun cannot even turn in a full circle and its vertical maximum elevation and angle leave much to be desired. This greatly diminishes the vehicle’s anti-aircraft capability.

However, the DShK heavy machinegun has higher penetration, 29mm with its best round. This gives you the capability to engage and destroy most 1.0 tanks with ease, except for early medium tanks like the Panzer III. The fun thing about the GAZ-AAA (DShK) is that many players will underestimate it or will simply dismiss it as being no threat to them. Until the GAZ kills them. So, as you can imagine, you can trigger a fair bit of players by destroying their tanks with this truck.

The third GAZ-AA-based vehicle in the game is the GAZ-MM (72-K). Unlike the previous two GAZ-AAAs, this one sits at battle rating of 2.3 and is armed with an actual cannon, rather than just machineguns. The vehicle is armed with a 25mm 72-K autocannon penetrating up to 55mm of armour.

This is enough to allow you to engage not only aircraft, but also tanks with relative confidence. And this GAZ will penetrate most, if not all, tanks at its battle rating when you aim at the sides and rear.

On top of that, the cannon has an armoured shield which is positioned in front of the gun crew to protect them from small arms fire and shrapnel.

But don’t get overly excited, there are downsides to this vehicle too. Being based on a two-axle truck, it loses some off-road mobility over its predecessors. The shield will not protect the gun crew from any real weapon and therefore the vehicle is de-facto left completely exposed. The cannon will frequently overheat during sustained fire. And lastly – you cannot shoot forward because of the cabin, which is a major drawback.

Overall though, this is a very nice vehicle which is tons of fun to play and you should definitely try it if you ever play for Soviet Union.

All of the above-mentioned vehicles require similar playstyles. Since they have no protection, you need to be constantly on the move. If you stop, you become a sitting duck and you WILL die.

Second, keep in mind that these are primarily anti-aircraft vehicles. If you engage ground targets, it is always important to shoot their sides or rears if possible or aim at the weakest spots, such as gun barrels, if you have to shoot the front. Unless they are Japanese, if you shoot at a Japanese tank, feel free to hit anywhere, you will penetrate it.

Monitor the airspace for enemy aircraft. If you feel like they might have spotted you, try to take cover behind tall objects such as houses, some rocks, teammates in tanks etc. so that the aircraft cannot hit you when they enagage and then step on the gas as soon as they fly by.

Also, do not try to knock down trees or crash through fences, at they might damage your vehicle. Yep, in case you didn’t know, if you crash your lorry into a tree, you will damage it. Rather than brainlessly rolling right at them, try to find ways to manoeuvre around trees.

And lastly, have fun! The beauty of the GAZ line-up of trucks is that you can introduce wild elements into your gameplay and do things you would never be able to do with tanks.