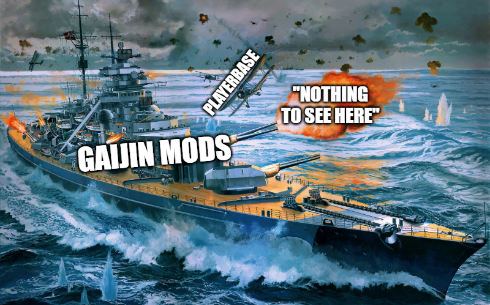 On June 16 2021, the 3.7GB update '2.7.0.55' was unexpectedly released on the Dev Server. Understandably confused, dataminers (notably gszabi99_HUN) double-checked the CDK and found an enormous list of new and unreleased vehicle models, assets and maps. Of course, the update was reverted extremely quickly after the magnitude of the mistake was realised, but it was too late for Gaijin.

Game developers have internal builds that they use to develop, test and finetune new content. As it turns out, a War Thunder developer accidentally compiled an internal game build and mistakenly uploaded it to the public Dev Server, where all the new additions were leaked. Scarper_, the international community manager had this to say:

What does this mean for War Thunder?

This leak is like no other in War Thunder's history and is extremely exciting. 110 vehicles were suddenly shown off to the community, which predictably erupted into excitement and speculation. Interestingly, vehicles that the playerbase had long-requested and Gaijin had teased about adding, such as the F-14 Tomcat, Su-25 Frogfoot, A-10 Warthog and M1A2C SEP were nowhere to be seen.

It's important to recognise that this leaked build may not have had ALL the vehicles, but this was definitely an unintentional incident, so it's not unreasonable to assume this is everything we're getting in terms of new vehicles for the foreseeable future. This is likely 3-4 major updates' worth of content, so there is an enormous amount to unpack here. The 3 civilian aircraft leaked are however for Darkflow's new game "To the Sky", so don't expect to see them in War Thunder.

The reaction to the leak was extremely interesting. On the "Rumour Round-Up and Discussion" forum page, there were generally few negative reactions to any content at all which is extremely unlike the typical release cycle of vehicles where there are many complaints and sour attitudes. Instead, Gaijin got a lot of praise for not only adding what people wanted for years, filling earlier gaps in tech trees and bulking out lineups that really needed it, but being (if unintentionally) transparent with the community and sharing what they are developing on, establishing a direct feedback connection between developer and consumer that has been lost for a long time.

While this sounds great, this was definitely an accidental move from Gaijin and I would advise people not to expect this sort of transparency from them in future. This was a once in a lifetime incident, and if anything, telling the community what's being worked on months in advance hurts Gaijin's sales as they no longer have that short-term hype to make money off of.

However, it is nice to see the community generally pleased and not at odds with Gaijin for a change, and many of these upcoming additions have made many people's day. You can view most of the vehicle assets that were screenshotted before they were swiftly removed here: https://imgur.com/a/5vuy8M5