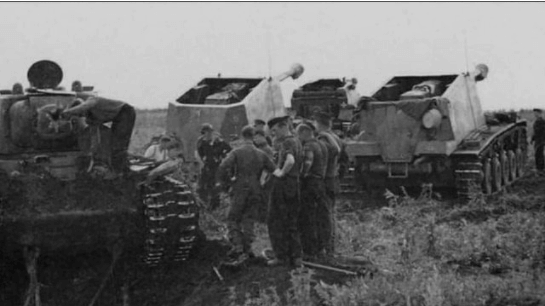 The German SPGs "Dicker Max" and "Sturer Emil" have seen drastic changes to their respective Battle Ratings throughout the years. The 105mm carrying "Dicker Max" has seen its BR been lowered around three times, while the 128mm carrying "Sturer Emil" has seen a reduction in its BR a staggering five times! With the War Thunder Team's desperate attempts to make the two glass cannons viable and fun to play, they are missing a great point. After a ridiculous amount of BR reductions, after which the poor German vehicle's problems remain, it should be clear that the lowering of their BRs won't solve anything.

As of Server Update 13.07.2021, the "Sturer Emil" saw its BR lowered for the sixth time. This time down to a BR of 4.3! While the "Dicker Max" was spared this time around, it has been through it about three times already, and now sits at a BR of 3.7(!). I've for a long time argued that neither "Dicker Max" nor the "Sturer Emil" need any BR reductions, but here it was again, and it struck the "Sturer Emil", which I view as the bigger problem of the two. "Why is this so?" you might ask. Well, everything the "Dicker Max" does and has, "Sturer Emil" kicks it up a notch: "Dicker Max" has a great gun, "Sturer Emil" has an even better one (same goes for ammo types, obviously); DM has 30mm of armour, the SE has 50mm; DM has bad gun traverse, SE has worse gun traverse; DM has a long reload time, while the SE has an even longer one; DM is sluggish with low mobility, the SE is more sluggish and with ever lower mobility, and the list goes on. The War Thunder Team also seem to see the "Sturer Emil" as the bigger problem, since it was introduced with a BR of 6.0 (!) and it has seen multiple reductions since then: 6.0 -> 5.7 -> 5.3 -> 5.0 -> 4-7 -> 4.3 (-> ?). When you thought it couldn't get any worse, a new table of planned battle rating changes was announced and published on the War Thunder Forums, delivering new BR reductions of the "Sturer Emil" and sometimes the "Dicker Max"

One could wonder why specifically these two poor souls have suffered through an immense amount of BR reductions when the 88mm carrying Nashorn (that once separated the two in the tech-tree) has kept its BR of 5.3 through most of its War Thunder career. Well, in reality, the answer is rather simple. They have severe drawbacks that seriously limit their capabilities on the battlefield. These mostly being both SPGs horrible mobility and lack of protection (armour), in addition to their subjectively long reload times. These drawbacks are common in these sorts of tank destroyers, all but the reload, which usually is a bit shorter for open-top tanks and tank destroyers like "Dicker Max" and "Sturer Emil". The drawbacks, I assume in this case specifically the reload times, are what limits the SPGs capabilities and combat effectiveness on the battlefield, making them more difficult to play, and ultimately slaughtering their respective statistics, resulting in a lowering of the BRs. (BRs correlate with in-game effectiveness). And since the drawbacks are even greater for our mister "Sturer Emil", we also see a more prevalent reduction of the BR for this specific SPG.

What would be the pros of reducing these German vehicles BRs? Would it even be beneficial at all? Seeing how the BR reductions have just kept on coming, I have a hard time viewing these "helpful" measures as helpful at all. As their BRs get reduced, now even approaching tier-II BRs, the SPGs obviously see a change in what enemy vehicles they get to fight. The lower the BR, the smaller and more nimble are the tanks, and for anyone who has paid attention, smaller and more agile enemy tanks are not what these two slow, German, hard-hitting misters would want to go up against. Not to mention how ridiculous it is for a prototype 128mm German K.40 cannon and for a 105mm K.18 cannon to be shooting (not to say wasting ammo (in-game sense)) on early T-34s, Shermans, Churchills, normal Valentines, Chi-Nus, and early French AMX-13s and ARL-44 heavy tanks. Most of these vehicles barely possess enough armour to ignite the fuse of these two German monster guns, all while most of them easily out-manoeuvre the slow "Dicker Max" and the even slower "Sturer Emil". Now this problem I just mentioned, mostly regards the "Dicker Max", since it sits at such a low BR to be facing exactly these vehicles used as examples. The "Sturer Emil" is at a, slightly, higher BR - but also with an even better gun, so the problems practically follows the German SPG up to here as well, just with different enemies.

What to do then? Lowering their BR evidently does not solve any of the prevalent problems. My suggestion is to increase their BR. Stop lowering it! Increase it! "Increasing a vehicle BR whenever it's underperforming certainly does not sound like a good idea." you might think. When I recently brought out the two German SPGs in preparation for writing this article (with their current lowered BRs), I obviously had to put them both to the test at this higher BR that I'm speaking of. While playing the "Sturer Emil" it hit me. This German experimental self-propelled anti-tank gun, with its Rheinmetall 128mm cannon, is incredibly similar to the well-known "Jagdtiger", which also sports a 128mm cannon (although a Pak 44 version). If you allow yourself to think about it, the different factors could be different versions of each other - one is heavily armoured and the other one is very thinly armoured. Very roughly speaking, it's the same gun, just fitted in different housings to fit various strategies. And even though this difference in housing technically speaking could allow for a different BR for the two vehicles is obvious, a BR difference of over one whole BR is not accounted for if you ask me. ("Jagdtiger" is currently 6.7 and the "Sturer Emil" is 4.3). Playing the "Sturer Emil" along with the "Jagdtiger", versing the American 6.7 line-up as well as Sovjet IS-2s, T-44s, and SU-100s and SU-122-54s, is greatly more comforting than versing the aforementioned low-tier vehicles of tier II. Arguing for an increase to 6.7 is stupid, and therefore that is not my intention. An increase to a BR of around the 6.0 mark, I believe, would benefit the "Sturer Emil" immensely. It fits in with the pace of the battle a lot better as well as with the size and complexity so to speak of the enemy vehicles it will face here. One simply cannot argue that the "Sturer Emil", with its 128mm anti-tank gun that is very closely related to the one found on the "Jagdtiger", will have problems facing these sorts of higher BR-enemies. This is what the redesigned 128mm anti-aircraft FlaK gun was meant to counteract, and does so very well in-game as well.

The "Dicker Max" evidently did not fit into the 6.7 styles of gameplay. Although not doing horribly here, I still obviously understood that this is not where the "Dicker Max" fits in. Where would it fit in then? A BR of around 5.0, I'd argue be beneficial for the German SPG. Here, it could be used as the bunker-buster alongside the Tigers and other encased German tank destroyers such as Jagdpanzer IV and Panzer IV/70.

The German SPGs "Dicker Max" and "Sturer Emil" have serious drawbacks that severely increase their skill-cap, making them very hard to use effectively. Placing them at a ridiculously low BR as a result of their low in-game effectiveness will not solve these issues. These drawbacks will not be countered by lowering their BR, rather the opposite. Making the two slow, long-reloading, hard-hitting German vehicles face smaller, more agile and nimble tanks, makes their vulnerabilities show a ton more than putting them at a higher BR where they'd mostly face equals and fight with enemy vehicles on equal terms and put their superior cannons to good use. Since lets' be honest here, what is more, enjoyable and makes you want to play the tank destroyer more? Shooting, penetrating, and one-shotting the enemy early T-34 variant from whatever angle you want, or penetrating and erasing that pesky, arrogant, and cocky American premium heavy T29 through its upper front plate from 1500ms away? I know which one I'd go with, and so do you.

One comment on “The Battle Rating Problem: "Fat Max" and "Stubborn Emil"”