Guide to Planes and their systems. 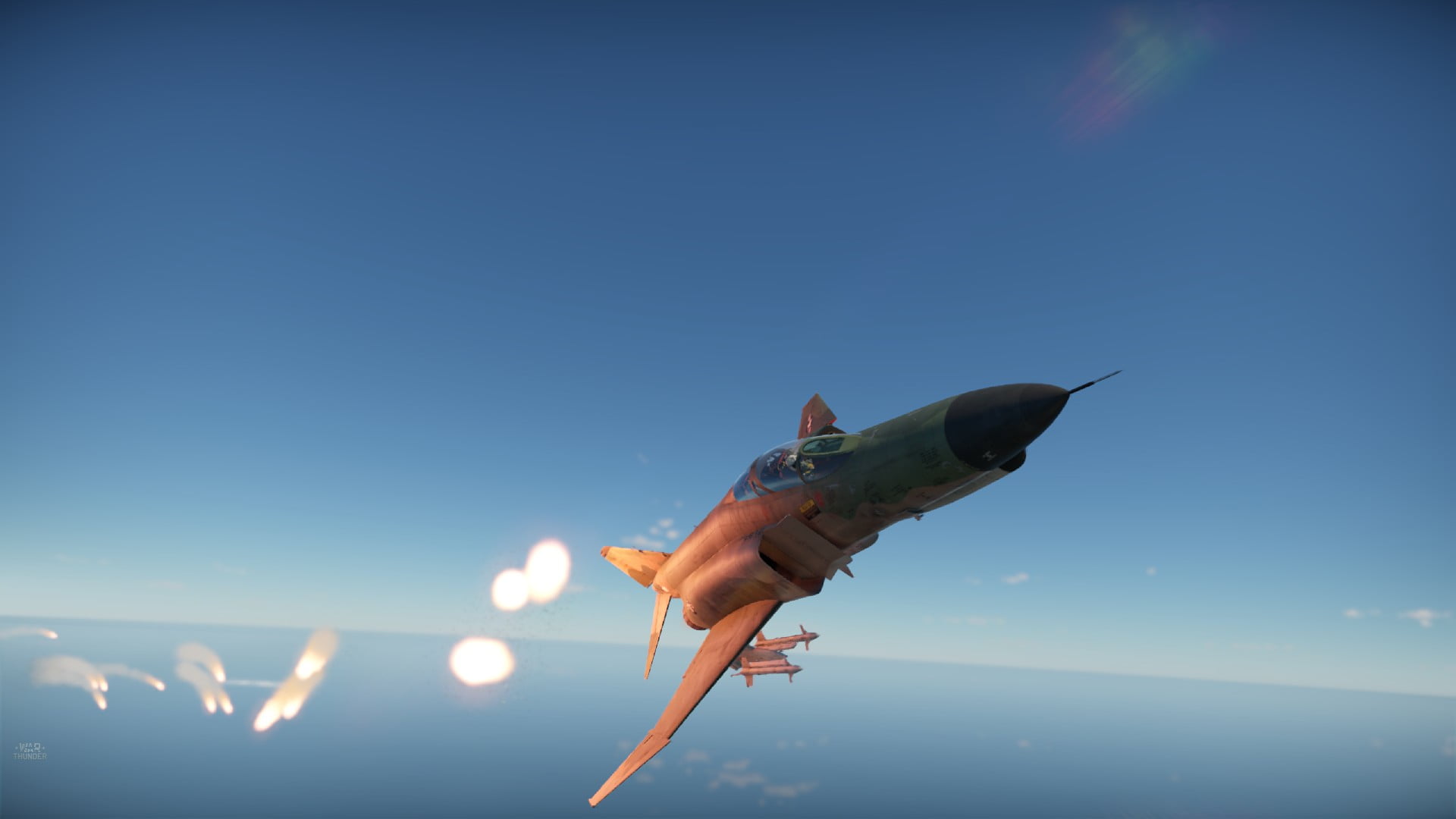 Many top tier aircraft feature systems making them more lethal or give them better survivability, but how do these systems work and how do you use them optimally? You can read all about that in this article.

After reading this you’ll have a lot of keybinds for weaponary. If you put a keybind to “switch secondary weapons” you only need one fire button and one lock button, since only the selected weapon is in use.

Almost any top tier jet comes equipped with radar. A radar can be a valuable asset to find enemies, and in some cases even destroy them.

First off, what is radar? RADAR stands for RAdio Detection And Ranging. It sends out radio waves in a certain scope around the radar station, in this case, the aircraft. If there is anything within range, the radio wave bounces off the object and goes back to the station. With the time between sending and receiving the system then also calculates the targets proximate position. With high frequency, radar can pinpoint the exact position and even closure speed.

The radar in War Thunder sits at the bottom right of your screen once turned on. It has a couple of parameters.

The yellow circle indicates the radar is in search mode, more about that later. The red circles show objects, in this case aircraft, and their approximate position within the set range. The purple circle shows the radars search radius, this can be changed using the “change radar search mode” keybind or  in the multi-function menu. The Blue circle shows the search range, in this case 19km, this can also be changed with the “change radar scope scale” keybind or in the multi-function menu.

Not only can you use radar to find targets, you can also use it to destroy targets. This is done by selecting “change radar mode” or “lock radar target on”. The latter is harder to use but doubles your lock range. Both when selected will show you a rectangle in which you have to position your target aircraft, when in range and without too much interference, your radar will lock the target.

Once locked on, your radar will display the following:

The blue circle indicates that your radar is set to tracking mode. The red circle shows your target being tracked. This feature can be combined with a semi-active radar guided missile. Examples of such missile can be the AIM-7, R3R and R530.

A radar lock will look like this. You can use your “weapon lock (air to air)” keybinding to fire a missile at your radar lock. While the missile is flying, you have to keep your target locked on.

Up last there is the radar screen in the top of your screen.

Here the red circle will show you your heading and the heading of your radar detections. The blue circle shows you where the objects are your radar has detected.

A Radar Warning Receiver (RWR) is a tool which shows you when you are getting locked on. A RWR works by detecting radio waves in the air, also the amount of them to determine if it is just a radar or a radar lock. It is very useful in the Beyond Visual Range (BVR) combat. Once you are being locked on to (we’ll show you soon what that looks like) you have to take precautions. First check the direction, it might be a friendly lock. If it’s not, watch closely if you see a missile flying, if you’re a cautious player you can also start taking evasive manoeuvres. To get yourself rid of a radar lock you can fly low to the ground, because of ground interference with the radar, or deploy chaff, a countermeasure type we’ll talk about later in this blog.

Displayed here are two RWR’s. The one on the left shows the RWR picking up a radar, but not getting locked on. It also shows you what direction from your aircraft the radar is. The 2nd RWR shows the aircraft getting locked on. This will go along with a warning tone. In the early stages of the fight, you can use the RWR to detect enemy aircraft, later on you can use it to defend against radar guided missiles.

A flare is a heat decoy, meant to distract IR-guided missiles. It is composed of a magnesium ball which is ejected and ignited at the pilots command to distract the missile. When using flares it is important to remember that you still have to take evasive manoeuvres, so flying in a straight line only using flares won’t work in most cases.

Chaff is another type of countermeasure, meant to distract semi-active radar guided missiles and radar guided missiles. It is composed off aluminium particles, which are jettisoned behind the aircraft. This makes enemy radar, or the missiles radar, think it is still tracking your aircraft, when in fact it is just chasing some particles. Also in this case it is important to take evasive manoeuvres.

As with everything, countermeasures, both flares and chaff, aren’t infinite. Use them smart and don’t spam them, because you may need them later. Both types of countermeasures can be selected in the menu next to ammo types before the battle starts.

Top tier aircraft are equipped with several types of missiles. There are Air-to-Air Missiles (AAM’s) and Air-To-Ground Missiles (ATGM’s).

Every missile has a maximum G-overload, this has to do with the missiles turning capabilities, the more a missile can pull, the harder it can turn. An exception to this is the British Short Range Air-to-Air Missile (SRAAM). This missile uses thrust vectoring to turn itself and can thereby do incredible manoeuvres. If you were to use this missile, keep in mind it has a maximum flying range of only 2km before it self-destructs.

The IR guided missile works by a missile looking for heat radiation from jet engines. You have to position your aircraft in a way the seeker will see the heat radiation. Once it’s locked and launched you can turn away. Missiles of this type are:  AIM-9, R3S, R60, R530E, R550, RB-24, PL-2, Red Top, Firestreak and SRAAM.

The mouse guided ATGM’s can be found on some Russian aircraft in the form of the Kh-66, Kh-25 and Kh-29. These missiles after launched will follow your aircrafts nose, so you have to keep it pointed at your enemy up until the moment of impact.

The third type is the tv-guided missile. This missile is a fire and forget missile and needs no more controlling after it’s fired. Currently the only aircraft with such system in place is the A-7D with the GM-65. You lock this missile by going into your TV camera, pressing your keybind which you have to set with “weapon lock (air-to-ground)” Once locked you can move away.

In the picture you can see the TV-camera being locked onto a truck. The system works by taking a picture of the target, the missile will then lock onto the electro-magnetic radiation which comes from the object in the picture.

The last one is the laser guided missile. This type of missile is currently only found helicopters like the Apache’s. The system works by putting a laser on a target and letting the missile follow the laser. Currently the system is purely for guiding your own missiles, but a buddy laser system might be added in the future, making you able to guide your buddy’s missile in.

In the picture is the camera view with the laser activated and the target locked, a AGM-114 Hellfire missile is on it’s way at that point.

A targeting computer is a useful asset for close air support. It is available for unguided bombs, rockets and guns. It can be switched on using the multi-function menu (weaponry->ballistic computer->on) or with a keybind.

It works as follows: a pod on the aircraft calculates where your ordinance will hit the ground. It does so by measuring the surrounding area and measures in the behaviour of the ordinance in question once released.

The first and most used is the bomb targeting computer. This gives you a arcade marker on the ground where your bombs will hit. The closer you get to the ground, the smaller the crosshair will get and the more accurate you can bomb.

The 2nd targeting computer is about unguided rockets. These are very unprecise and so other than with the bombs, this one isn’t very useful. It gives you a general idea but is still no guarantee of hit.

The last type of targeting computer is one for the gun very accurate on the other hand. It gives you an idea of were your bullets will hit. The longer the range, the lower your crosshair will be.

Hopefully this helped you get along better with your aircraft. Try the things out in a test flight or custom battle. Once you master all of these extra’s your plane has to offer, you’ll be much more dangerous with them.

Don’t forget to join the discord server to be notified about new articles and content, or to submit your own: https://discord.gg/gcufdsGnWz

One comment on “Guide to Planes and their systems.”